Menu
MENU
Home > Encinitas > About Us > Dr. David A. Willes 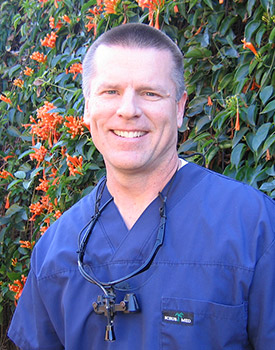 Dr. David Willes is a dental veteran, having practiced dentistry for over 25 years. He graduated from Brigham Young University in 1989, then went on to Oregon Health & Science University School of Dentistry, where he graduated in 1993. One year later, he completed his general dentistry residency at the Portland VA Medical Center.

He practiced dentistry for several years in Oregon before returning to his home state of California to open Willes Dental in Encinitas in 2009. In 2016, Dr. Willes proudly opened our second location in Escondido, where he and Dr. Gloria Tengonciang help our patients build healthy smiles.

Earning the trust and respect of our patients, the community, and others in the dental profession is a top priority for Dr. Willes because he wants to provide the best care possible. It’s why he has worked so hard to complete advanced training in several areas, including multiple dental implant systems, ClearCorrect orthodontics, and Lumineers veneers.

Dr. Willes is also passionate about giving back to the community. Over the years, he has:

When he is not hard at work keeping SoCal smiling, he enjoys taking full advantage of living near the California coast. He loves spending time with his family on the beach, boating, wakeboarding, surfing, and just being outdoors.

Here are some other fun facts about Dr. Willes:

We encourage you to visit our office and get to know Dr. Willes even better. He loves meeting new patients!

What Our Patients Are Saying

My husband and I have been going to this dental office for over 10 years,...
Read More

My husband and I have been going to this dental office for over 10 years, everyone here is so friendly and professional. We have had many different procedures done and never once had a bad experience. Highly recommend!

Professional. The dental hygienist is awesome. Staff are nice.

Professional. The dental hygienist is awesome. Staff are nice.

The dental experience was a great one for me…cured my strong dislike for dentist visits....
Read More

The dental experience was a great one for me…cured my strong dislike for dentist visits. The whole office was amazing, professional, courteous and friendly. The receptionist was very welcoming and went out of her way to be helpful and make me feel comfortable. The Dentist was kind, gentle and informative. He provided excellent service. Not to forget the back office staff, she was friendly, informative and made me feel comfortable. The whole team was outstanding.

Includes complete dental exam, full-mouth X‑rays, and cleaning. Does not include periodontal treatment.

Request an Appointment Back